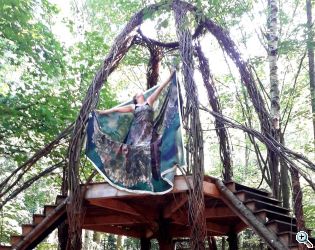 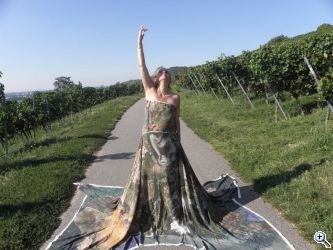 Regina Franks work has been combining text textile and technology, video performance and painting since the late 80ies. She has shown her work widely in Europe, USA and Asia, among them at the New Museum of Contemporary Art New York, Bronx Museum, Serpentine Gallery London, MOCA Los Angeles, the Cultural Olympics in Atlanta, Spiral Wacoal Art Center Tokyo and Museum of Modern Art Sapporo, San Diego Museum of Art, Chienku Technology University China, Expo 2000, Unesco in Paris. For London Artfair, project section with Brian Eno and Beezy Bailey she developed Slowdown Runway with students from Goldmiths University in January 2017. Regina Frank had used the title "The Artist is Present" for 21 years working with interactive performance installations until Marina Abramovic used it for her retrospective at MOMA. This inspired her to go deeper and to develop the Motto: The HeArt is Present.

She lectured at numerous prestigious universities, and ran a video workshops for teenagers and kids. She was artist in resident in Japan, Tokyo, Tokamachi in 1996 where she developed a Kimono for the Olympic Games in Atlanta with the community and later in Sapporo (SAIR) in 2004 where she developed a project with the community of Sapporo with children, various Japanese adults, films and paintings named Sharing Silence” for the Sapporo Museum of Contemporary Art and the CAI. She was several times as an artist in Resident at Bauhaus Dessau, wehre she worked on video-art teaching master classes. At Montalvo residency in 2005/2006 she developed Dreamweaving, culminating in a video and software application, a calendar/catalog and a number of tapestries. In Taiwan as artist in residency she worked with the student community of the Polytech University and developed 2 videos, foto-stories and two installations. In Boston at the school of the Museum of Fine Arts she developed a performance tour Traveling Torso”, with her students. In 2018 she had a solo exhibition in Germany at the IWZ International Center for Forest Art, and Darmstädter Tage der Fotografie - In Darmstadt a city where she is an artist in resident every year for a few days or weeks since 1994 …more than 20 years. She developed an installation for the MAAT (Museum of Art Architecture and Technology) that is part of the larger series iLAND which Frank has shown in seven different countries in 21 cities so far. Recently she participated in Hannover at the iJacking, at Geteiltes Land Berlin Teufelsberg, BioArt 2018, Seoul South Korea, in Tracey Emin’s project in the VIP lounge at Frieze Artfair London, TheNewArtFest18 featured iLAND at Websummit, the largest tech conference in the world and MUNHAC (Museum of Natural History) in Lisbon, FutureFood Hannover. She participated with workshops and community project FutureFood at Kunsthalle Hannover this year, as well as in Seoul South Korea, and in December 2019 she will be artist in resident at the Science Museum (Sciencia Viva) with public workshops and installations.

Her work is in numerous private and museum collections, such as San Diego Museum of Art and the Deutsche Bank Collection. Regina Frank’s work bridging text, technology and traditional textile, was featured since the early 90ies in various history books, art magazines such as on the cover of Arte y Parte, Lusitania and Sculpture Magazine, newspapers such as FAZ, Japan Times, Time Out etc. as well as Vogue, Harpers, Parade Magazine and Cosmopolitan.